SPECIAL TRIBUTE TO JAMES HUNT AT THE SILVERSTONE CLASSIC 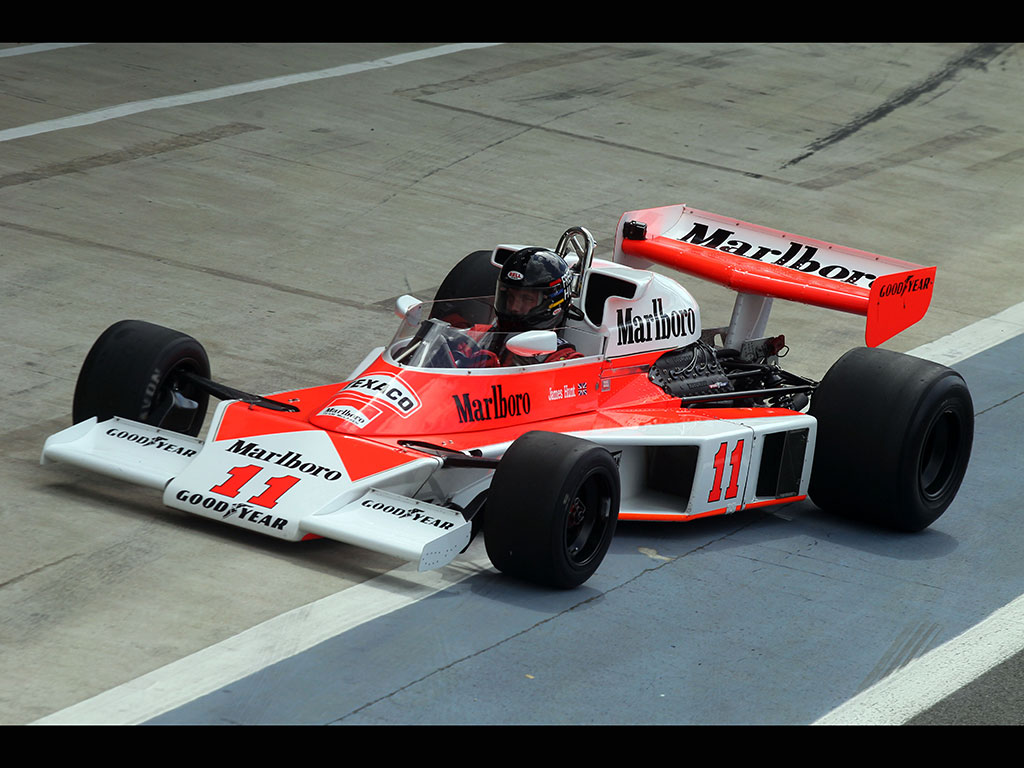 The headline grabbing career of one of Britain’s most charismatic and colourful sportsmen will be celebrated at this summer’s Silverstone Classic (29-31 July). It’s exactly 40 years since hard driving, fast living James Hunt overcame all the odds to win the FIA Formula One World Championship in 1976 – a dramatic feat recently acclaimed in the award-winning movie Rush.

Hunt sadly passed away in 1993 at the age of just 45 but the legend lives on and the ruby 40th anniversary of his crowning achievement will be marked at the world’s biggest historic motor racing festival in July, with special displays curated by his two sons Freddie and Tom. These displays will include a number of James’ most notable road and racing cars plus rarely seen trophies and memorabilia from the flamboyant Englishman’s title winning 1976 season.

The special celebrations at Silverstone are very appropriate, too, as Hunt savoured more Formula One success at the superfast Northamptonshire venue than at any other circuit worldwide. As a much-loved underdog, home hero Hunt scored a hugely popular maiden F1 win at Silverstone in April 1974 when racing for the locally based Hesketh team. Although the BRDC International Trophy was non-championship, the grid featured many of the era’s top teams and drivers.

Two years later, Hunt ignited his title winning campaign with a second confidence boosting International Trophy victory, this time for his new team McLaren. And it was at Silverstone that, as reigning champion, he won his only British Grand Prix after an epic dice with John Watson in 1977.

“I know the crowds at Silverstone back in the seventies really took my dad’s heroics to their hearts, so it’s going to be very special for all of us in the family to be marking the 40th anniversary of his World Championship at this summer’s Silverstone Classic,” enthused Freddie Hunt who drove one of his father’s title winning McLaren M23s during today’s Silverstone Classic Media Preview curtain-raiser at the legendary Grand Prix circuit.

“I’ve seen so many photos and films of my father racing the M23 that it really was emotional to get behind the wheel and experience just a smidgeon of what it must have been like to race these fantastic F1 cars in period. It really was a remarkable era and one which the Classic always celebrates in style.”

Indeed, the McLaren M23 and its successor the M26 which Hunt raced to British Grand Prix victory in 1977, will feature in the two rounds of the FIA Masters Historic Formula One Championship – among the many highlights on the action-packed Silverstone Classic schedule. Freddie, himself, is also planning to race a giant-killing Mini in the showdown for Big Engine Touring Cars from the early sixties.

“It’s a tremendous privilege to have Freddie and the Hunt family so involved in this year’s Classic, 40 years after James famously took the title in 1976,” said Nick Wigley CEO of event organiser Goose Live Events. “Knowing just how special James was to the fans at Silverstone, we invited Freddie to last year’s event and have been making plans to celebrate this important anniversary ever since.”

Fans wanting to be part of these special celebrations must buy their tickets in advance. Adult prices start from £42 and full details of all tickets – as well as hospitality packages and weekend festival camping – can be found on the event website at: www.silverstoneclassic.com